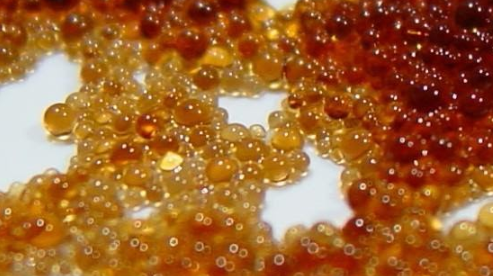 The process of water softening is done so that hard water, which is when there is a high level of mineral content buildup in the water supply, can soften up. This is to avoid dry and flaky skin and hair, faded clothes, frequent plumbing repairs, an increase in water bills and other types of problems. This method is also used to soften hard water in America. However, water softening itself isn’t exactly free of flaws per se. This is due to the water softener leaking resin beads.

What Is Water Softener Resin Made Of?

So what is water softener resin made of? Water softener resin is made up of polystyrene that is also collectively known as “ion exchange resin beads.” These beads are actually tiny little spheres that are between 0.3 to 1.2 mm in size and are made by combining polystyrene strands that are wrapped in a crisscross fashion alongside Divinylbenzene which holds the resin beads together like glue.

Read more about how to test water hardness. If you live in Phoenix, Arizona, visit these guys for water softener services:

In spite of resin beads being made of durable polystyrene plastic, they don’t exactly last a lifetime. Depending on several factors such as iron damage, percentage cross-link in the bead, hydraulic shock and flooring damage, the standard 8% water softener resin breakdown will be 2 to 10% annually. After continued exposure to excess levels of chlorine or continuous buildup of iron on the resin, the plastic resin beads can be damaged. When that happens, the water softener will leak out resin into your pipes. Later on, you will slowly start noticing yellow beads in your toilet, bathtubs, think and so on.

One of the biggest questions that arise from this phenomenon,” is water softener resin toxic?” Well, you’ll be happy to know that they are not. However, they do eventually clog up small appliances and fixture passages. So it is of the utmost importance to have your household’s plumbing inspected to ensure that these resin beads are completely flushed out of your plumbing system.

What To Do When Your Water Softener Is Leaking Resin Beads?

Although you can call a plumber to inspect and then eventually flush the resin base from the plumbing system, this is something that homeowners can accomplish on their own and save money in the process. We put together a list of solutions that can help you out with that:

Most Common Cause Of A Water Softener Leaking Resin Beads: A Broken Membrane

The source of resin beads leaking out is a sign of a broken water softener membrane (learn more about what this membrane does here) which is what holds the beads in place. When this happens, the beads are free to roam about anywhere the water takes them, which could be in the bathtub, the shower, faucet, and toilet. One of the biggest indications of knowing the membrane has broken is low water pressure, and the biggest source of the problem for that is the water softener.

Just remember that when you discover that the membrane is broken, you’ll need to flush every single plumbing fixture in the house. But doing so is not an easy task and requires some prior knowledge of your plumbing system and you have to understand the differences in your house’s fixtures.

Step One: Put The Softener Into Bypass Mode

Once you have discovered that the water softener is what’s resulting in low water pressure which is what is backwashing resin in your plumbing system, then the next thing to do would be to put your water softener into its “bypass” mode.

Most software models come with a bypass that spelled into the inlet as well as the outlet. The “bypass” mode allows you to turn a valve that comes that fits between the inflow and outflow pipe. The next thing to do is to turn the valve counterclockwise so you can open it. Next,” the outflow and inflow valves so you can shunt the water to the bypass pipe. After that, have the software disconnected from the plumbing and electrical. Then have the valve unscrewed and set aside. Finally, dump all of the resin out. Be sure not to run hot water during this process as doing so would have to the beads leak into your water heater

The next thing to do would be to drain and flush the hot water heater. To do this you have to turn off the power as well as the cold water supply that leads that connects to the heater. If you have a gas heater with you, be sure to set the temperature gauge at the lowest possible setting. Have a garden hose attached to the drain valve which is below the heater. Now open the pressure valve to begin draining the water. Use a bucket to catch some of the water to see if it’s clear. If you see that there are still beads coming out from the heater, then open the cold water to allow more water to drain into the heater. Continue flushing until there are no beads left.

For this step, you have to remove every metal screen from each faucet. Be sure to have a commander placed under every faucet to catch resin beads wherever you can. But first, you’ll need to turn the cold water faucet completely and have it run for a few minutes. Then do the same with the hot water faucet. Continue to catch and toss resin beads.

Step Four: Run All Water Appliances To Flush Them Of Beads

For this step, you have to run the washing machine, dishwasher, and any other appliance that uses water without any water in it. You find that the appliances are getting clogged up or are beginning to overfill, then switch them off. They test the water hoses and look for any clogs. If there are any beads inside, flush the hoses to clear them out. Then reattach the hoses and run the appliances once more to continue flushing.

Once you have cleaned out the resin from your resident, find out how much new resin you will be needing. For this, you will have to get in touch with the local water treatment company or go online to purchase the appropriate high-quality resin for your water softener system. You might also want to buy a new riser tube, gravel and a resin funnel (if your system recommends it).

Just to reiterate, the water softener resin is made of nonrecyclable polystyrene, which means that it cannot be reused and needs to be disposed of right away, before it ends up at the landfill, polluting the environment and whatnot. And the best used water softener resin disposal is to put it in the bin.