Best Pruning Tips and Pruning Time for Your Garden

Making your garden beautiful is one of the small joys in life that everyone indulges themselves in. It somehow contributes to your mood and imparts positive attitude as well. Pruning is the primary way of achieving that.

Pruning is all about corrective techniques and enabling the tree to develop in the strongest and healthiest form possible. Timely pruning and correct techniques combined produces the best results, and this ultimately results in better form and quality of the tree. Contrary to what most people do, pruning is best suited while the trees are young, and in their ideal stage to manipulate the way they grow. Pruning young trees also eliminate the need to prune more frequently as they mature and becomes more difficult to prune as well (except removal of dead branches).

Pruning trees in their earlier stage also serve the purpose of identifying the primary branches as well. These branches are also called Scaffold Branches, and they act as the primary direction for enabling the strongest growth mechanism. The stronger the tree grows from the scaffold branch, the lesser pruning will be required as the tree matures, and hence, it reduces the need to pay constant attention to the tree as well. 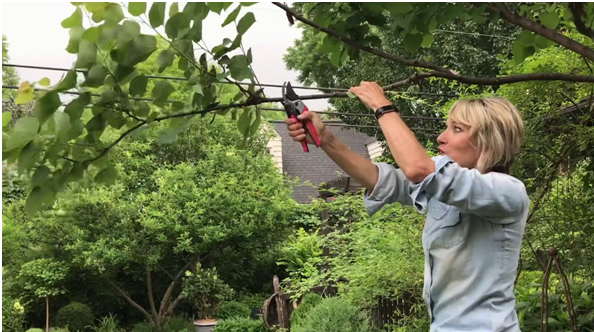 Even though pruning the trees at young stages can minimize the need to prune more frequently, the need to prune cannot be entirely eliminated. For example, dead branches cannot be avoided, or the formation of suckers, etc. This is why it’s important to always remember some crucial pruning tips to ensure that your pruning produces positive results.

Most people simply take their pruning shears or chainsaw and start cutting down dead/infected branches as they go along. While this may work fine for some people, it is not the best-recommended way to go about it. Instead, you can first analyze the location of those branches that you want to remove and get a more practical idea to remove it with minimal effort.

Cutting off an infected branch is not as simple as just removing it for the sake of reducing the infection from spreading. In fact, if you leave a large stub when making the cut, it can in turn act as a catalyst to spread the infection by causing the insects to crawl in. It is therefore of utmost importance that you prevent leaving a stub while cutting the dead branches. You can do this by cutting the branches as close to the trunk as possible (but not entirely touching the trunk).

Use the right tools

No pruning is complete without using the right pruning tools. You need to know when to use a particular tool in order to execute the pruning process with minimal ease. It would be rather stupid if you use your chainsaw for cutting small-medium branches. The same goes for using the normal pruning shear for every purpose as well. Know that there are different pruning shears for different lengths, thickness, and height of the branch. Some of the most common shears include

1. Bypass Pruner (the normal shears that resemble the appearance of scissors)

3. Ratchet Pruner (they are similar to Anvil pruners, but they cut in stages and provides wrist support as well)

These narrow-angle branches are called Suckers, and they prevent the growth of the tree in accordance with its original growing direction. Their only purpose is to suck out the nutrients of the tree, and they create inferior branches as well. They often grow up to be ugly and diminish the overall health of the tree. Hence, it is vital to identify suckers and remove them as well.

When do you prune?

Different trees have different pruning seasons which contribute to the overall efficiency of the pruning process. It doesn’t matter how well you are pruning if you are pruning at the wrong time, all that is going to go down the drain. Some of the most basic pruning time includes

Rosebushes should be pruned during the end of spring frost

Dead branches are best removed during the summer

In general, if you want to prune for better tree shape aka form, it is best suited after the leaves fall, as this gives a better visual idea of which branches to remove.

Whatever the purpose may be, or whichever the trees may be, an arborist will always give you a better picture of how to prune with optimal efficiency. Especially if you are dealing with large trees, it is better to take the assistance of professional Sydney Tree Company to help you obtain the best pruning results.