Builders in China completed a 170,000 square foot, 30-story prefabricated hotel in just 15 days, ending on New Year’s Eve – and posted a time-lapse video (above) to show off their impressive feat, the Huffington Post reports.

Construction workers bolted together the new hotel, in Dongting Lake in Hunan province, from pre-made modules put together in a factory and then placed them on steel structures at the construction site, according to the International Business Times. It can reportedly withstand an 9.0-magnitude earthquake.

“It completely changes the way buildings are constructed and, I believe, is about to change the entire industry,” architect Lloyd Alter wrote on the blog Treehugger. 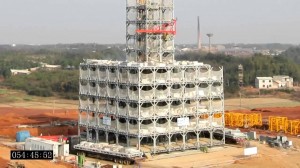 The Chinese company behind the speedy process, Broad Sustainable Building Corporation, has some former success with building quickly. Once the world’s largest producer of air conditioning equipment, it previously built the 15-story Ark Hotel in Changsha, China, in just six days.

The implications of the latest project seemingly go beyond simply adding to the Dongting skyline in a speedy fashion. “Construction is just about the only industry that has not been exported,” Alter explained. “But now the Broad Sustainable Building Corporation has designed a system that will let them build anywhere, to construction tolerances of +/- 0.2 mm.”

Which likely means American hotels will soon be added to the growing list of things that come with a “made in China” stamp.